At Fratello Watches, it could be said that we’ve viewed the inception and subsequent growth of the American micro brand, Oak and Oscar, from afar. However, that’s not exactly the case. Several of us are in touch with its founder, chief designer, and wearer of many other hats, Chase Fancher, on a relatively frequent basis. We chat via WhatsApp, always run into him at Baselworld and generally grab a beer during SalonQP. So, why haven’t we featured the brand on our site? The reasons are benign, but perhaps the main cause won’t sound so; Oak and Oscar is a victim of its own success. Translation: by the time prototype or test versions of the first two models (the Burnham and the Sandford) made their way over to Europe, they were already sold out and covered by our friends on the other side of the Atlantic. Today, though, we’ve decided to break tradition and cover Chase’s newest edition, the Oak and Oscar Jackson. No, we’re still not hands-on with the watch (this explains why we are using press shots), but you’ll hopefully come to see why we thought it’s worthwhile to discuss. Hint: there’s a chronograph afoot! 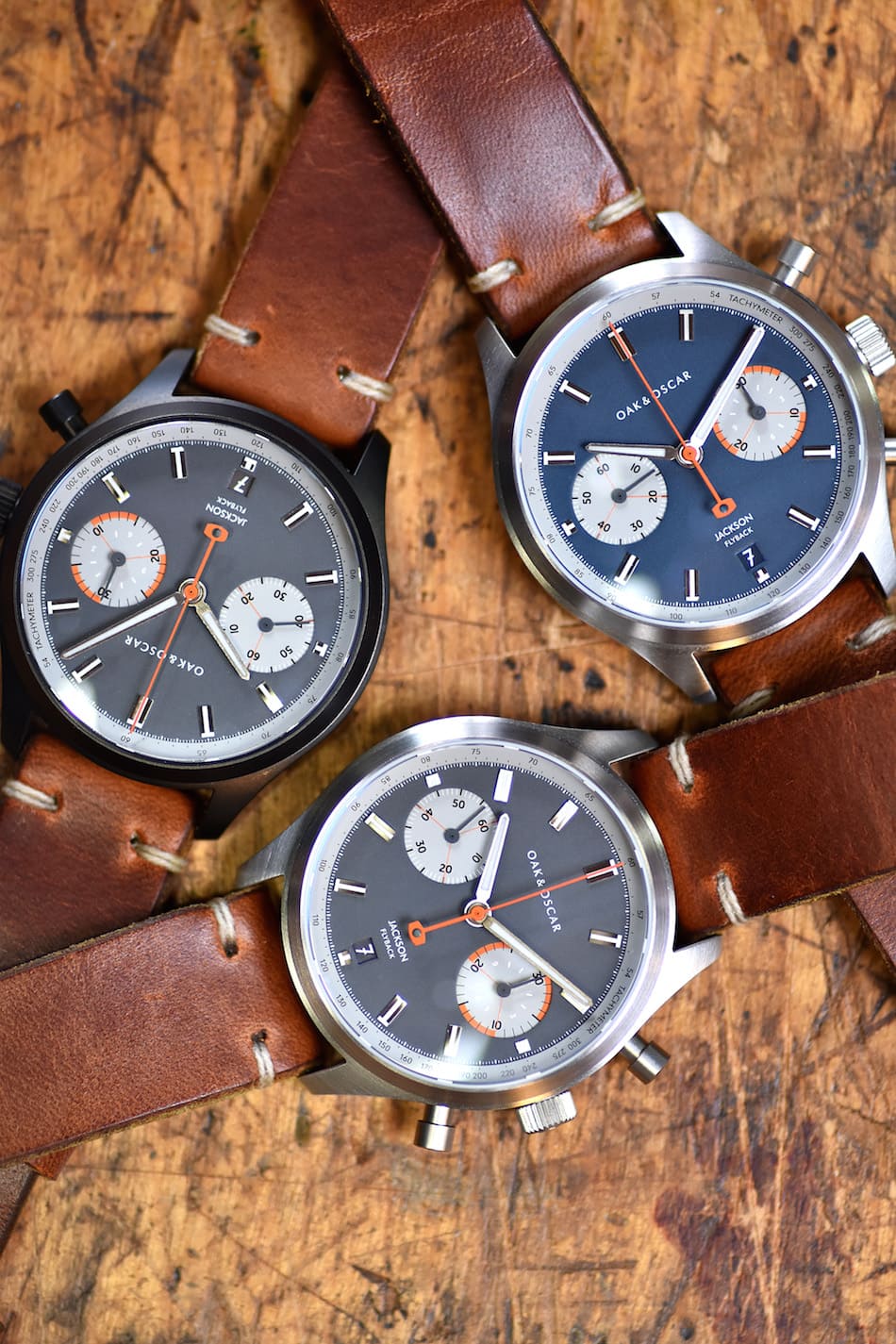 The Oak and Oscar Jackson Chronograph

We won’t spend a lot of time on the history of Oak and Oscar, why Chase started the brand, or to retell how he likes to work with various outside partners as suppliers. This has been covered heavily and adeptly elsewhere. Instead, we’ll discuss the Oak and Oscar Jackson (named after Jackson Park in Chicago and the first organized auto race ever held in America back in 1895) and we’ll attempt to shed light on its development and why it’s such a big deal for the small brand. As the clue suggested, it’s important to note that the Jackson is a chronograph and that’s really a good place for us to begin. 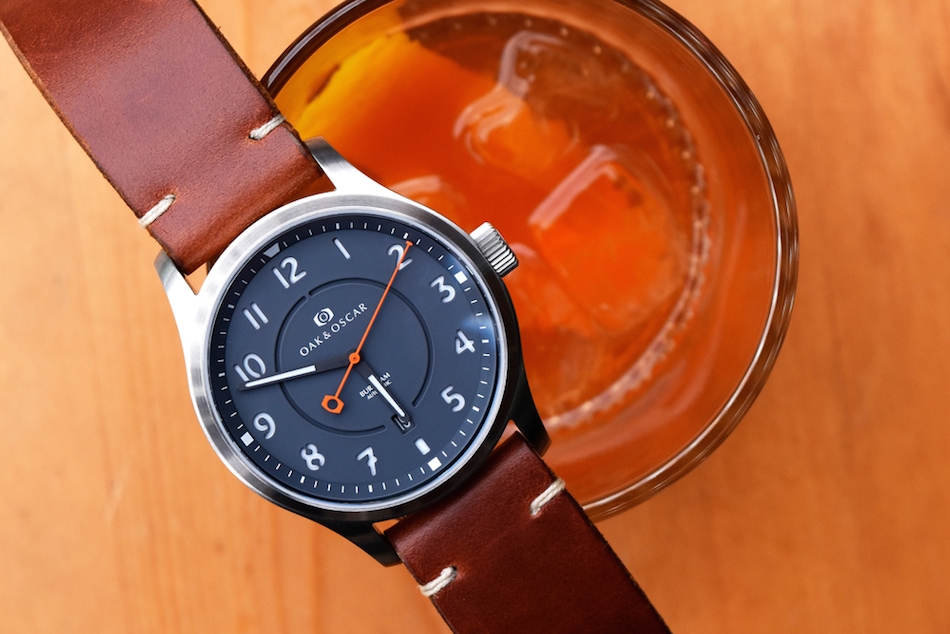 A couple years back, at Salon QP 2015, Balazs and I were roaming the halls during one of the late night cocktail and beer sessions when we ran across Chase. We’d met before, but had the chance to speak a bit more about his original watch, the Burnham, and how things were going as a micro brand. 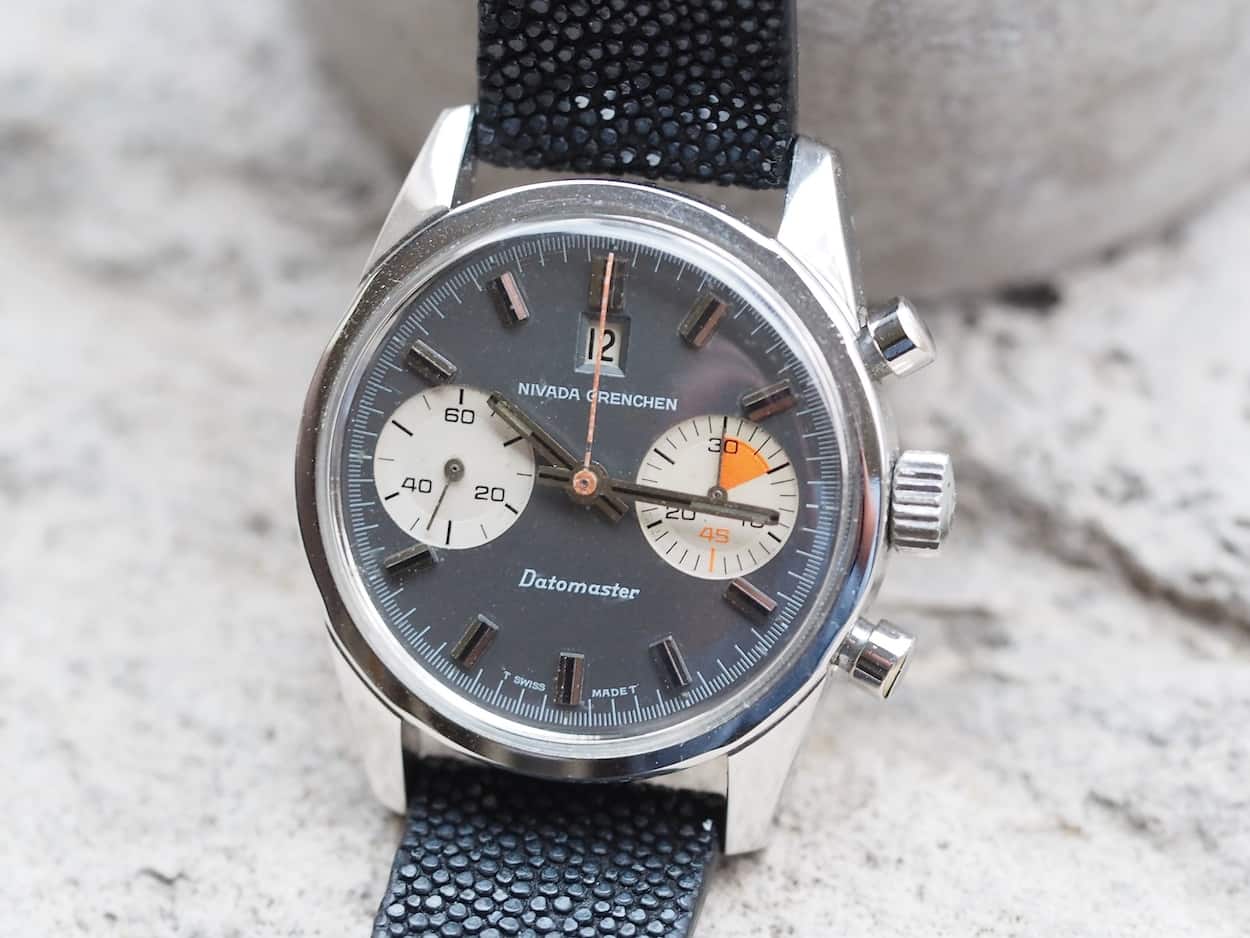 Then, as all watch people do, I took a look at his wrist and noticed that he was sporting a Nivada Datomaster – a sublimely designed and rare vintage chronograph that just so happens to blend a couple of what I later learned to be Chase’s favorite colorways: orange and grey. I was excited because I had just picked one up and was simply waiting to get to the USA to fetch it. And then, we discovered that Balazs knew of one in Hungary and that he was already in negotiations to purchase it. So, here we were, three watch nerds in the middle of London – none of us from or residing there – and we somehow had all landed upon the same rare (there were roughly 7 known at the time) watch by coincidence. We left London with the promise to bring “the triad”, as we called it, together 4-5 months later in Basel – and so we did. So, yes, our discussions really started about chronographs. 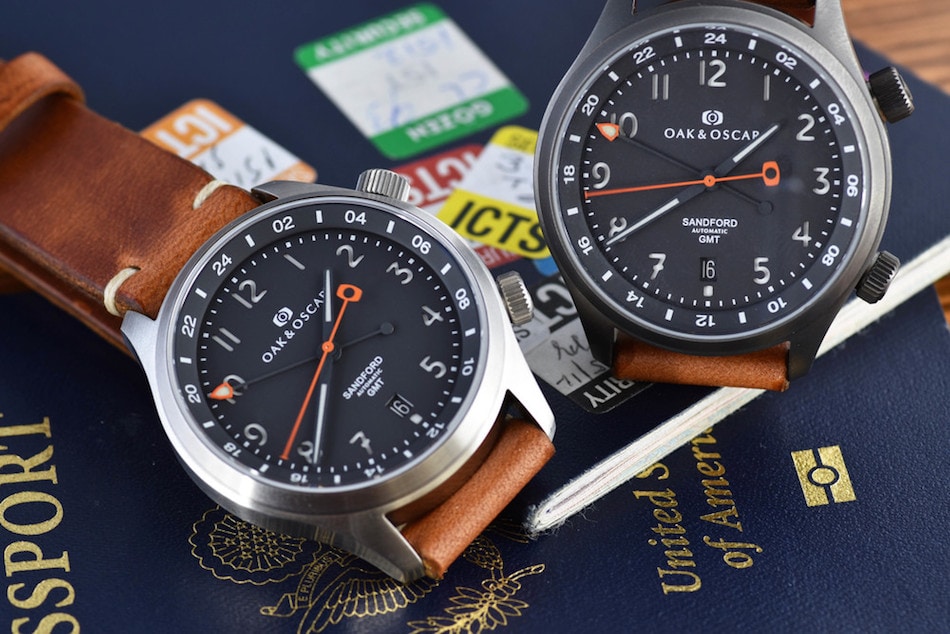 The Sequel: the Sandford

Fast forward to Baselworld 2016, Balazs and I were a bit early to the Nomos party held annually at the train station. Like a couple of hoodlums, we each grabbed a can of beer at the train station convenience store and took a seat in the main hall. Here again, we ran into Chase for the first time during the show (no, he wasn’t swigging on a can) and he ultimately showed us renderings of his next project, the dual time zone Sandford. We liked the look of the watch and as most know, it was a great success. Then, sometime in the first part of 2017, Chase dropped both Balazs and I notes that he was working on something audacious – a chronograph. 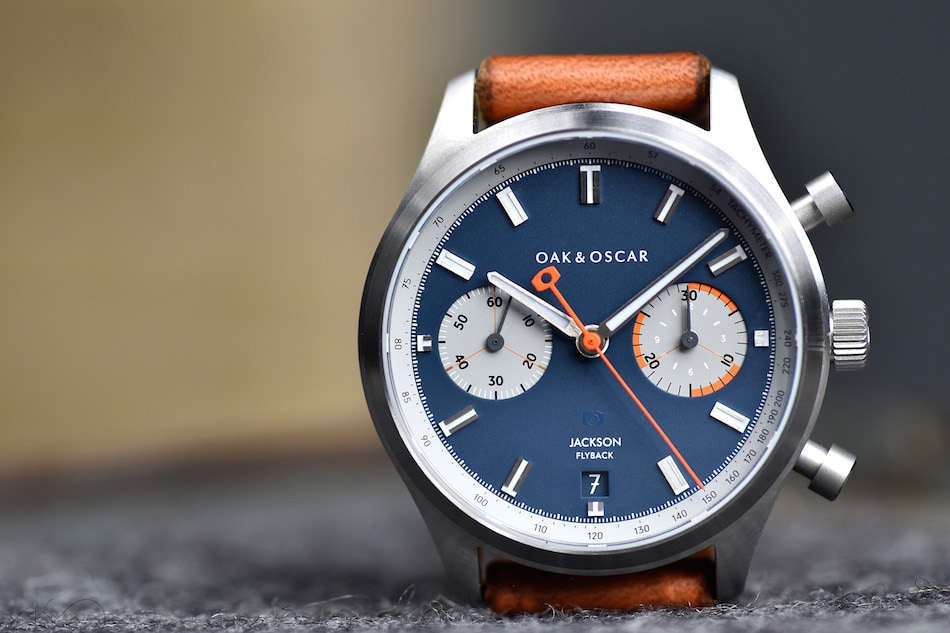 For the next several months, and at very random times of day, Chase would shoot over some renderings of what would ultimately become the Oak and Oscar Jackson chronograph. In some cases, it felt like a test as 4-5 images would make their way over and it took a real keen eye to note the differences. But, here’s a person in Chase, with two models under his belt, who focuses on the details and, at the same time, was faced with the challenge of maintaining his brand identity. As examples, the watches in the past have used “7’s” with slashes through the middle, barrel-shaped counterweights on sweep hands with t-shaped tips, and the color scheme of orange and grey. How would these things translate onto a far more complex chronograph dial? Quite well, in my opinion, but more on that in a moment… 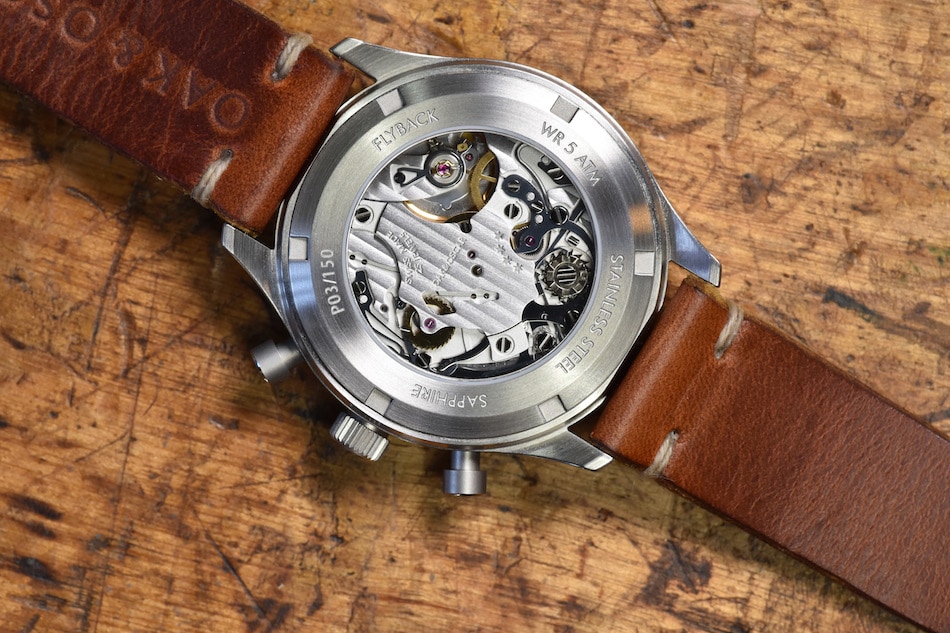 And then there was the choice of movement for the Oak and Oscar Jackson. Balazs and I chatted a lot with Chase about this and there was one recurring theme; it had to be manual. Thankfully, Chase had decided on this from the get-go and perhaps he was simply looking for some (rhetorical) feedback. After all, for a watch that would ultimately debut with a run of just 400 watches across three variants, this piece was not likely to be cross-shopped with a run-of-the-mill automatic chronograph. And for collectors of vintage watches who dabble in the new, one thing we all desire is for more manual chronographs (are you listening, Breitling?). 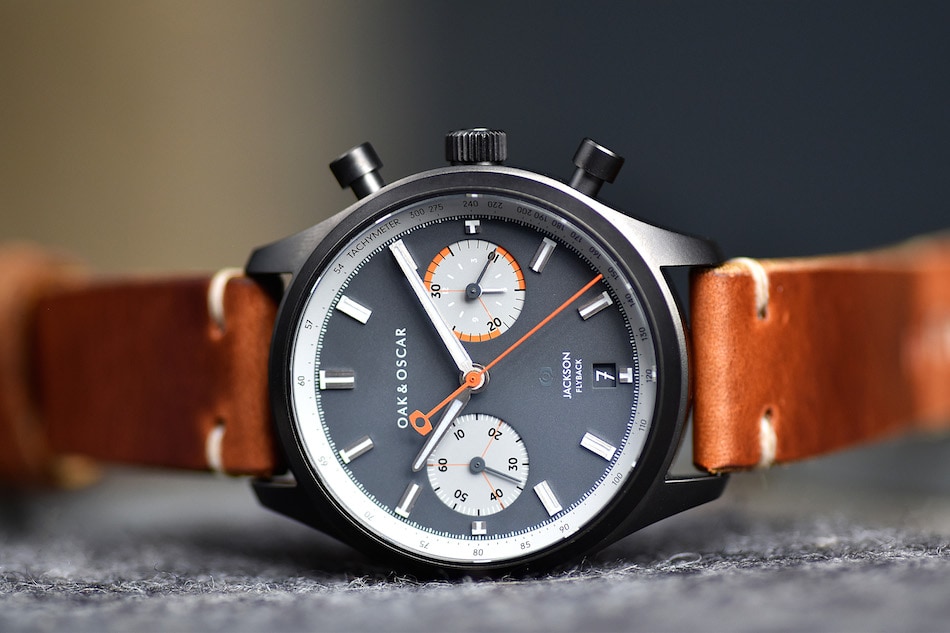 Some will end up chiding a pre-order price of $2,650 for one of the 150 grey or blue-dialed stainless Oak and Oscar Jackson pieces or $2,850 for one of the 100 charcoal-PVD coated pieces. We’ll hear about the nerve the brand has in offering a piece that’s roughly $1,000 more than its last piece. But believe me, the watch has more “in it”. We’ll hear from those who wonder why anyone would buy something from a small brand at the suggested price when there are so many pieces from “established” brands at or below this price – and that doesn’t even consider the used market. Well, my guess is that if you’re amongst the detractors for this reason, you likely weren’t in the market for this watch at any price. I’m not here to tell you how to spend your money, but I do ask that you consider some things about the Jackson that just might open your mind – and perhaps your wallet. 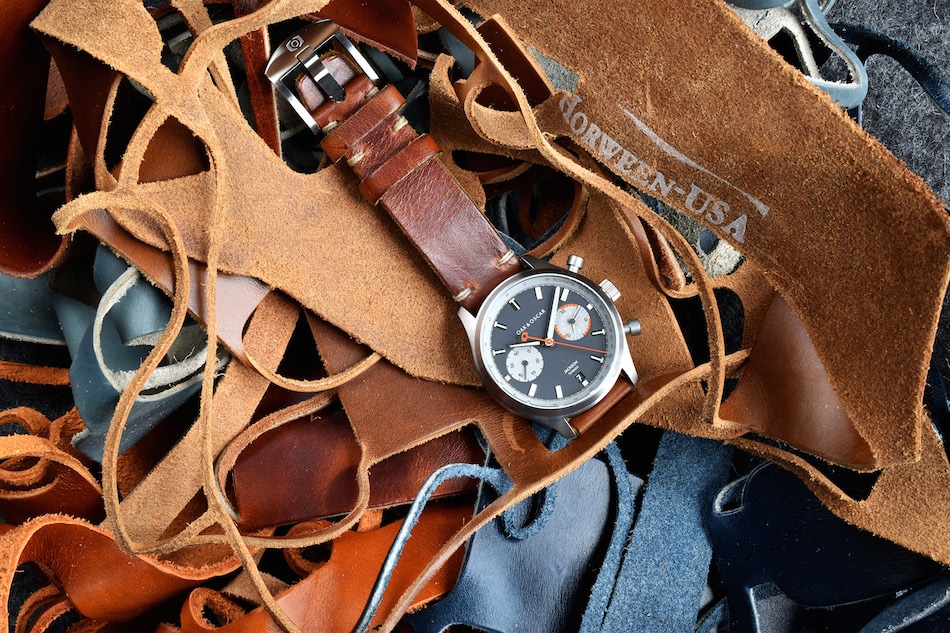 Oak and Oscar: Funded by a Team of 1

First off, let’s realize that Oak and Oscar is entirely self funded. The brand is owned by one person and from the discussions I’ve had with Chase, money made on the prior model is used to fund the next model. There are no investors and from what I can tell, he’s trying to do this without piling up debt. So, this speaks to why we see roughly one watch per year and the quantities are limited. Yes, folks, suppliers generally demand payment before the end customer purchases his/her watch and that means cash flow is something to consider. Second, no matter what you think about watch component costs, a chronograph simply costs more to build than a 3-hander – or even a GMT. And then there’s the movement… 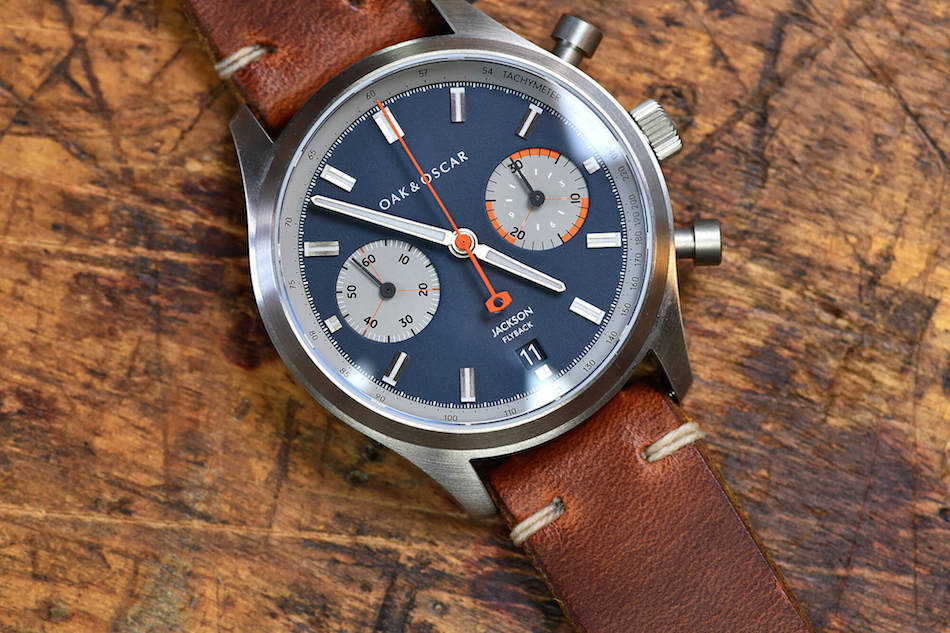 The Oak and Oscar Jackson, in a surprise move, debuts a brand new movement. Yes, this is the first installation ever of the Eterna Caliber 3916M hand-wound flyback chronograph movement with a column wheel. 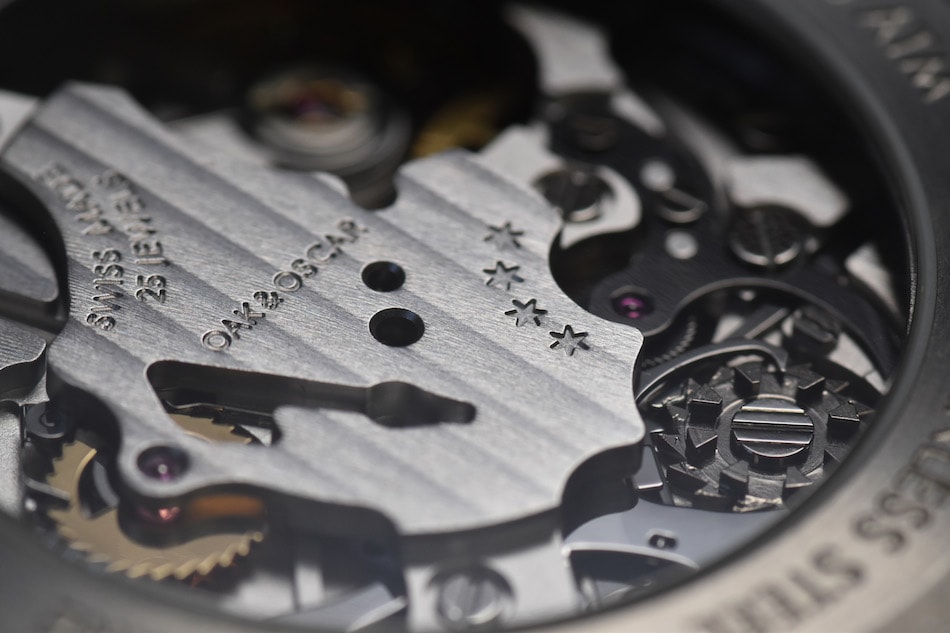 Yes, a manual flyback…and he actually pushed Eterna to alter its automatic in order to create a movement that requires winding. It utilizes two totalizers (the left for running seconds and the right has two stacked hands for measuring both hours and minutes), features a date at 6:00 and has a power reserve of 60 hours. Detail wise, Chase struggled with the decision on whether to remain consistent with his first two watches by continuing to offer a skeleton case back. Offering a view of this novel movement meant finishing which equals cost. He wisely chose to go forward, though, and the finished result is something worth viewing. 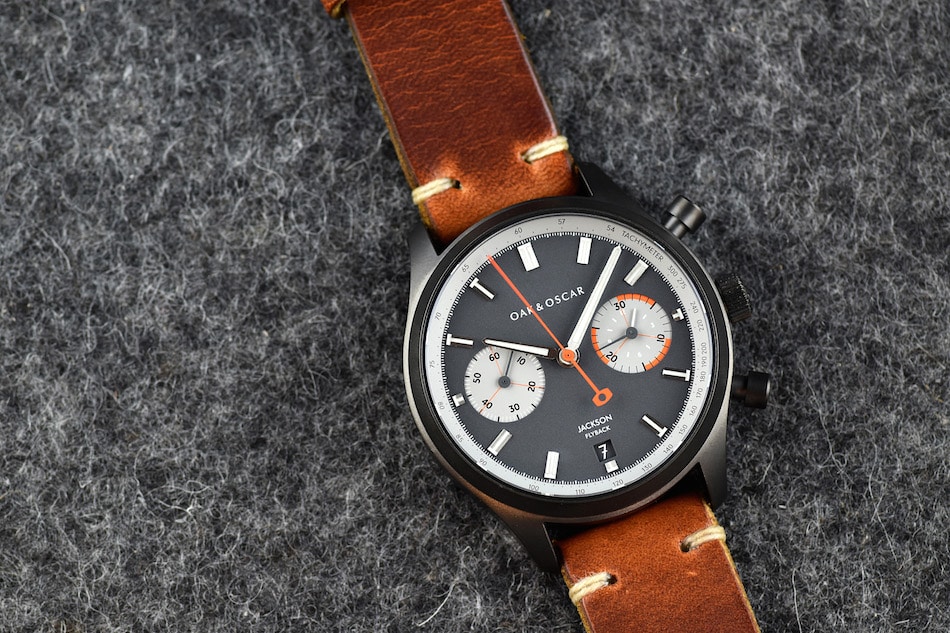 A Date Wheel that Works

Dial-wise, the Oak and Oscar Jackson does integrate the brand’s design language quite well along with so many other details. As an example, for all of us curmudgeons out there, can you really begrudge this innocuous date window? Whether you choose a grey or blue dial, the date wheel will match perfectly – how often does that occur within a large brand? Color and spacing wise, there are loads of nice details that neither serve as too retro nor busy. For instance, the sub registers contain either sectoring or blocks of orange color to help differentiate 5-minute blocks of time. Then there’s the central sweep seconds hand with its barrel-shaped counterweight. But, then, where would the barrel-shaped brand logo fit onto the dial itself? In a nice nod to simplicity, it stealthily “hides” under the hand counterweight when the hand is zeroed. As soon as the chrono is started, it shows on the dial subtly as a slightly different texture above the date window. The signature t-shape normally found at the end of an orange hand finds itself in the applied hour markers (which aligns to the end of the orange chrono hand). Then, a light grey inward-sloping tachy bezel helps to bring the eye into the center of the dial. Oh, and note the little hash on the “7’s” anywhere they’re to be found. Naturally, a double-domed sapphire crystal tops things. 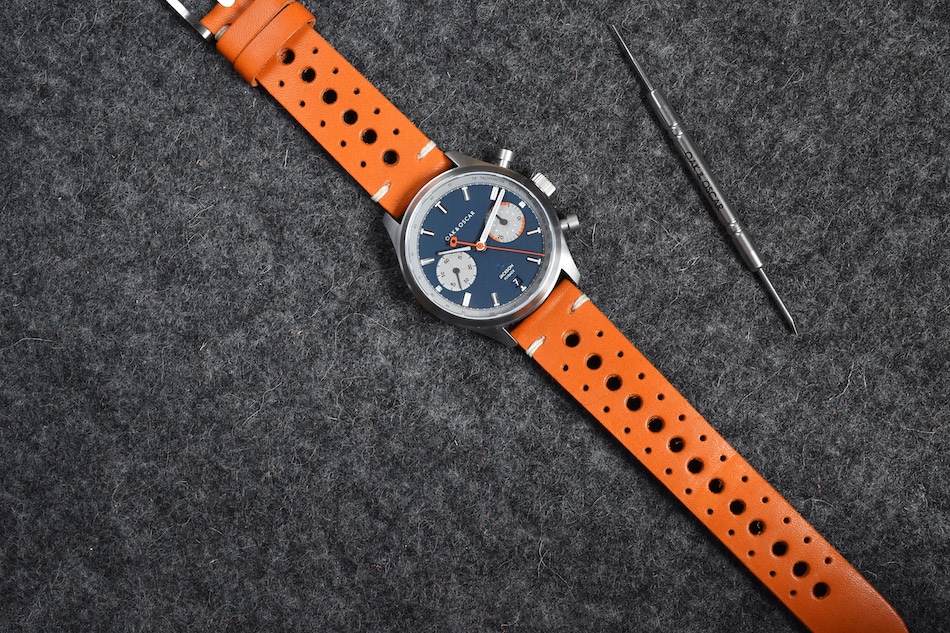 At 40mm in diameter, 14.5mm high, and with a 20mm lug width, the Oak and Oscar Jackson won’t confuse anyone as small or thin. That being, said, the watch isn’t a huge monster and looks like it should wear well for about 95% of all situations we find ourselves in today. In fact, at the recent WatchTime NY event, the common reaction was that the watch wears very well and thickness isn’t an issue. Credit the overall proportions of the watch for making it a comfortable wear. 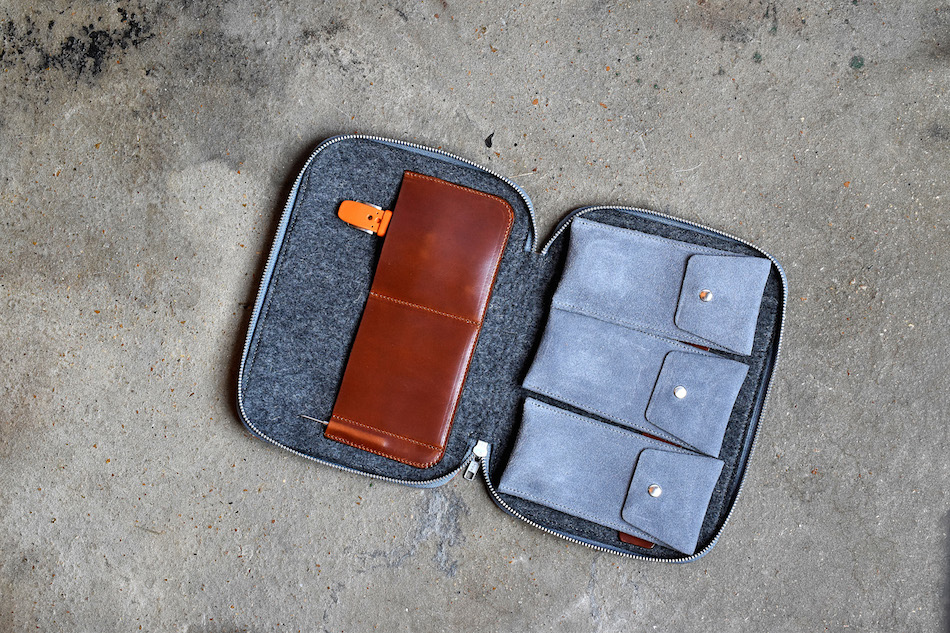 Plus, the watch comes with a strap tool and two fantastic Horween straps: one in brown and one in orange with rally styled holes. The packaging is even practical. For those of us who travel with more than one watch, a Horween zipper pouch is included that can hold three watches. Let’s see how many have the Burnham, Sandford and the Jackson. 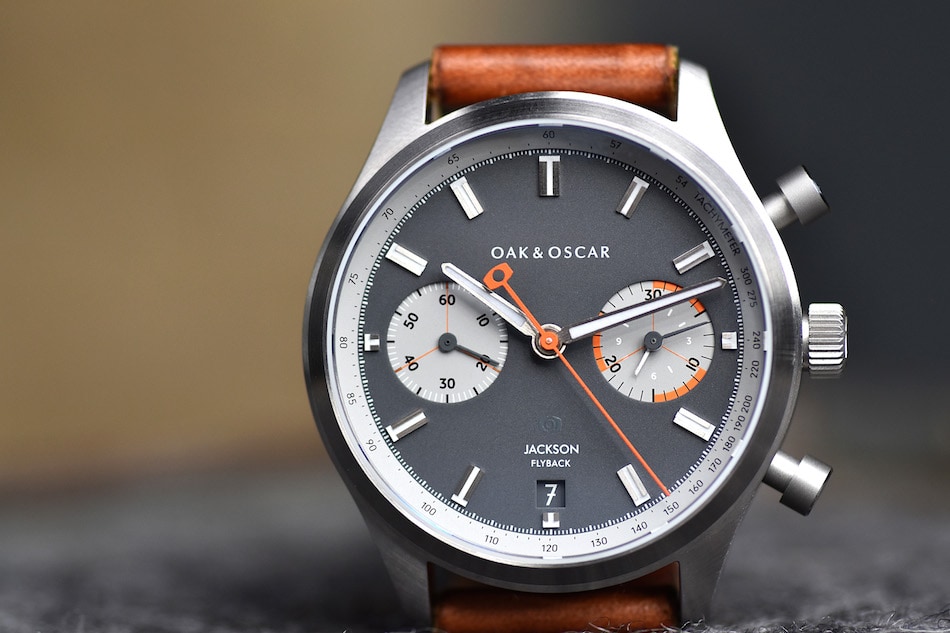 In the end, the Oak and Oscar Jackson is not your normal micro brand watch. With limited numbers and higher pricing, it’s clearly not a mainstream volume play. And while there’s nothing “in house” about it, there’s something very cool, at least to me, about it being the first installment of a high quality manual wind flyback chronograph movement from a reputable maker. I also need to congratulate Chase on the high levels of detail and that he was able to sort out the types of bugaboos that most armchair watch critics deride (erm, date wheel again). The Jackson is a fantastic achievement and as so many of Oak and Oscar’s customers own both models, I’d guess that it would not take long for all 400 editions to sell. The word is that orders are brisk with the navy edition leading the pack. With any luck, I’ll get to spend more time with a Jackson in a couple of weeks and will gladly report back.

For more information and ordering links, head to Oak and Oscar’s site. Expect deliveries during the first quarter of 2018.