In front of us is the 11th Laureus IWC special edition in the famous blue color: the IWC Da Vinci Chronograph Edition ‘Laureus Sport for Good Foundation’. Let’s have a look.

The Laureus Sport for Good (here after: Laureus) is a charitable organization that was founded by Richemont and Daimler in 2000. The goal of Laureus is to use sports to make the world a better place, without voilence, discrimination and disadvantage. Supporting over 100 programmes in approximately 40 countries, Laureus tries to make a social change.  Since 2005, IWC has been a partner of Laureus. Every year they create a Laureus limited edition watch, of which part of the proceeds goes to support the sport projects. All watches have this typical blue dial and an engraving on the case back. The engraving is based on the prize winner of a drawing competition for children, organized by IWC.

The first special Laureus watch was launched by IWC in 2006.

The IWC Da Vinci Chronograph is based on the 1980s Da Vinci that IWC used to have in their collection, until they started with the tonneau-shaped Da Vinci in 2007. This year, IWC says farewell to this particularly shaped case and revives the round Da Vinci that was originally introduced in 1985. The Da Vinci collection as such is much older and dates back to 1969.

Although the 1980s are not really famous for its good taste in design, the Da Vinci model proved to be strong and the new 2017 collection has received a very nice modern touch. 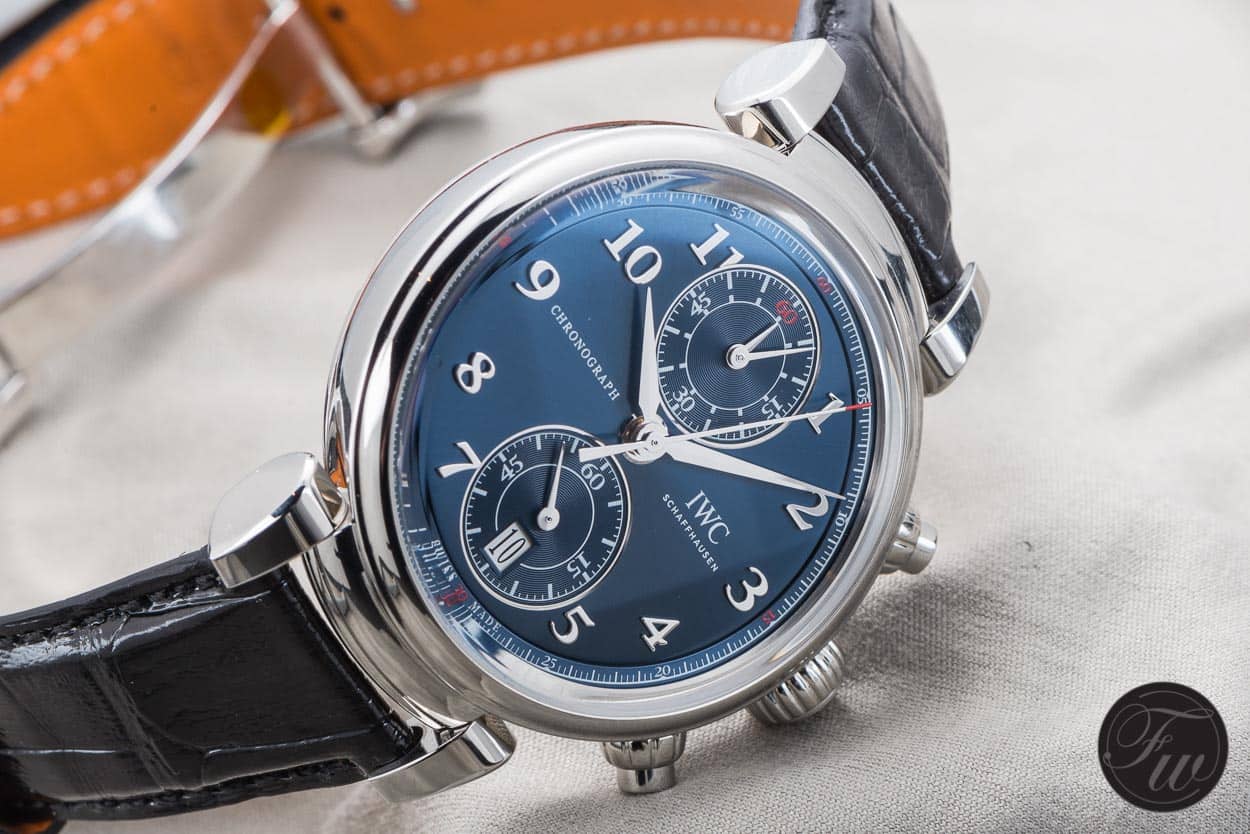 One of the first things to notice is the beautiful blue dial and the contrast with the silver hands and applied large Arabic numerals on the dial. It is a beautiful sight and very easy to read. The dial has a couple of red accents in there as well, as you can see the minute track has red numerals at 15, 30, 45 and 60. The tip of the chronograph seconds hand is also red. The hour and minute totalizers are located in the sub dial at 12 o’clock, while the normal running seconds and date aperture are located at 6 o’clock. The chronograph also has a fly-back function, for a quick restart.

The sub dials are snailed and give a nice subtle contrast to the large blue dial. 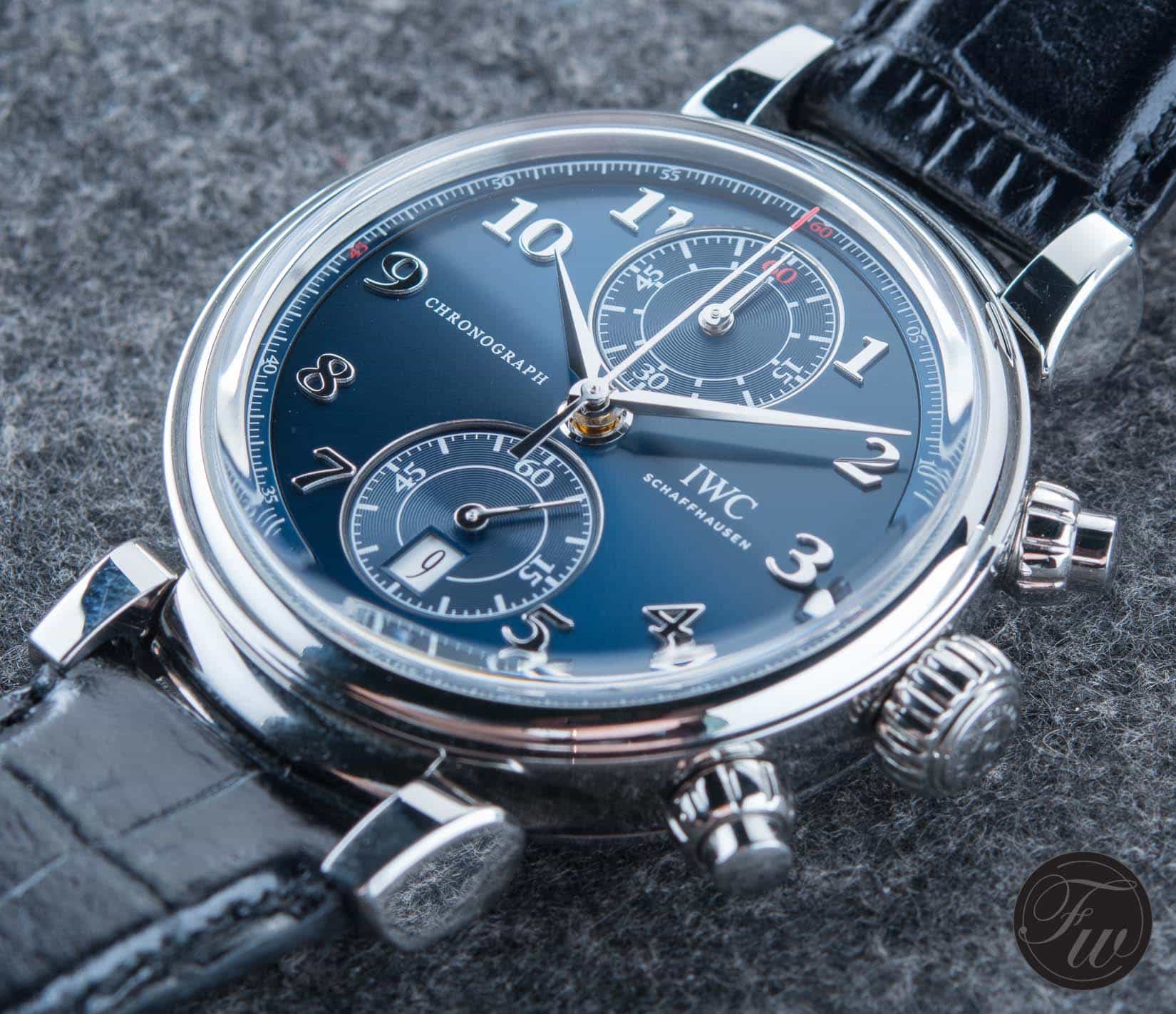 The case design is based on the 1985 Da Vinci, as I wrote above. The lugs are a bit different though, and have this more modern touch. Although you can definitely consider these lugs to be a bit beefy, they are not as chunky as the original 1980s design.

With a diameter of 42mm, I found the watch to be very comfortable to wear on the wrist. It is a ‘medium’-size case these days, which makes it a perfect (dress) watch for most men out there. The watch is a little thick, with its 14.5mm, but for a chronograph that is fine. 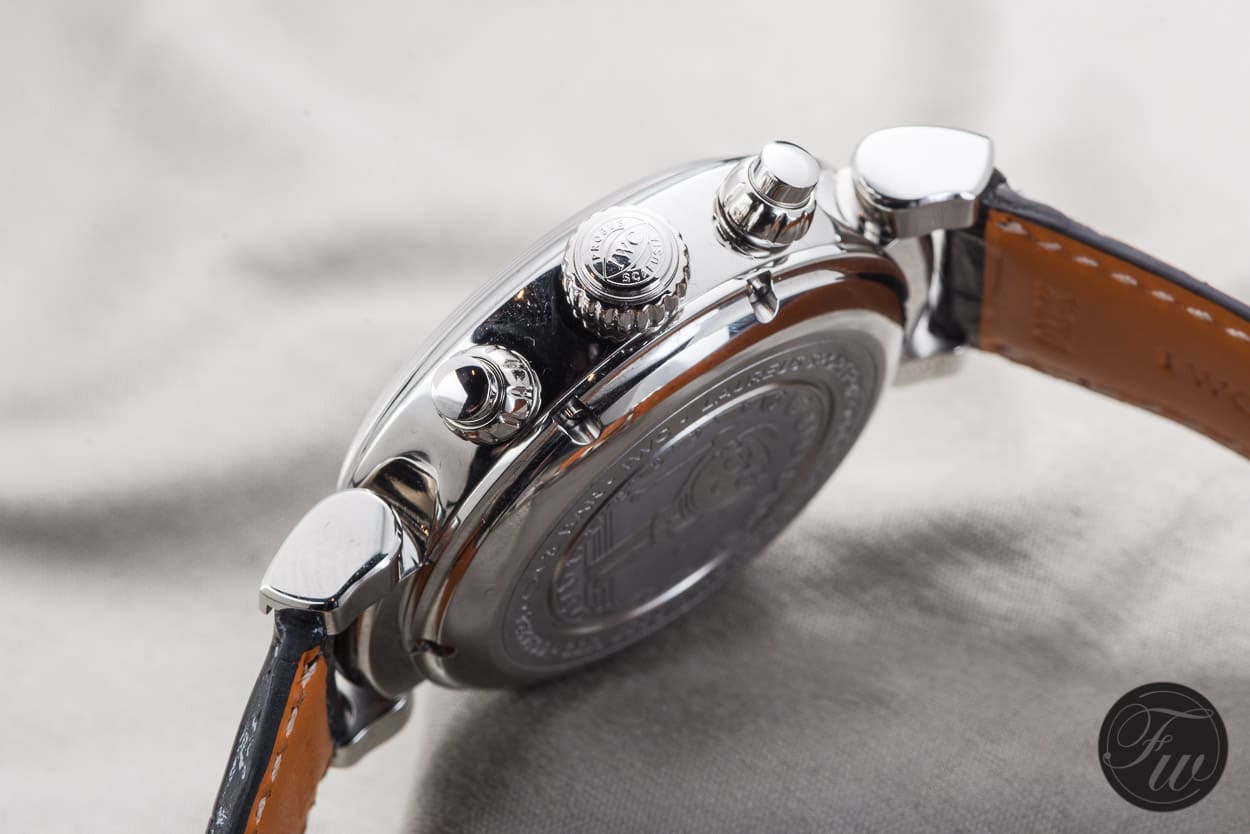 The crown has been signed IWC Probus Scafusia, which is the company’s motto since 1903. It is Latin and means – freely translated – ‘Good thing (or quality) from Schaffhausen’. The large pushers look nicely crafted and are easy to operate.

The case back doesn’t reveal the movement, but instead shows a drawing made by a young kid who won the drawing competition organized by IWC. This year’s engraved drawing was made by the 12-year old Hou Ye from Shanghai, China. 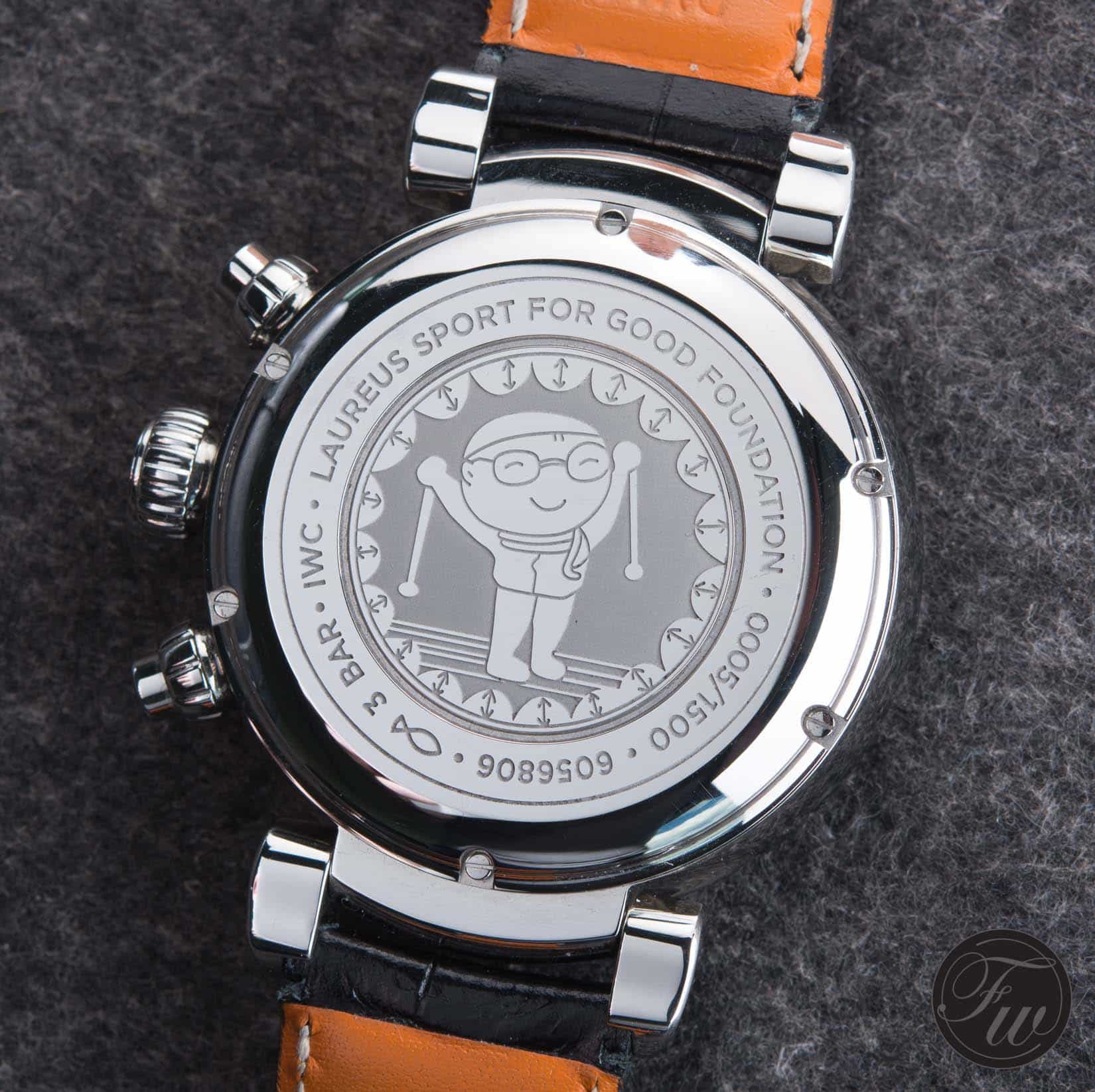 The watch is very comfortable, despite its height and beefy lugs. The lugs are actually nicely curved and ensure that the strap, made by Santoni, fits the wrist nicely. The orange lining of the strap is the Italian shoe manufacturer’s signature. I am a happy shoe wearer of this brand since over a decade, and can only underline the craftsmanship and quality of them. I can only guess that the straps made by Santoni are of equal quality (besides that they look awesome). The IWC Da Vinci Chronograph comes with a folding clasp of course. 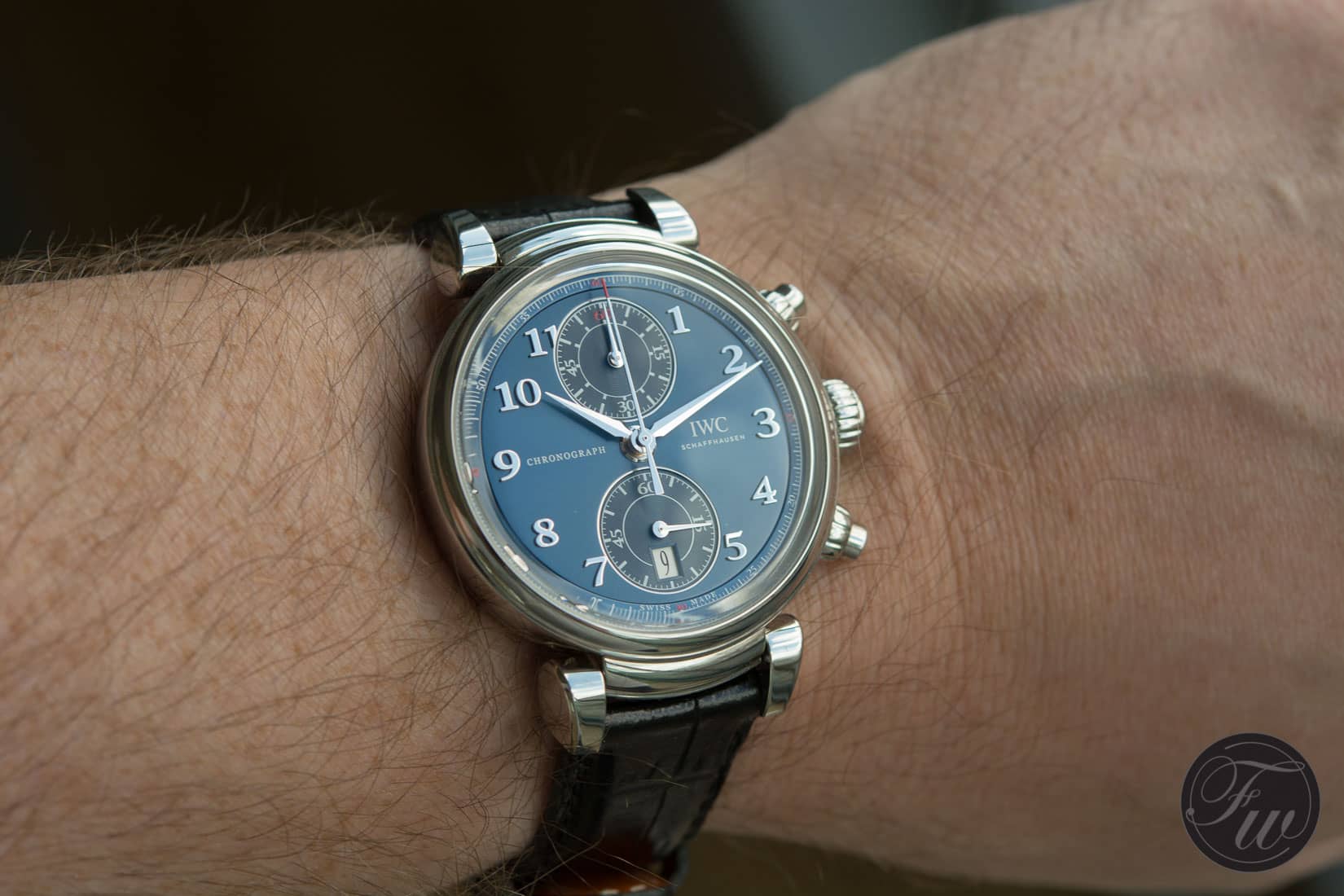 In this price category (13.700 Euro), you may expect a movement to be manufactured in-house. IWC uses their caliber 89361 chronograph for this watch. A fly-back chronograph movement with column-wheel that ticks at 28.800vph and has a 68 hour power-reserve. The chronograph has a 12 hour totalizer (combined in one sub dial with the minute totalizer).

Supporting a good cause like Laureus by purchasing a beautiful watch is an interesting approach. Part of the proceeds of all sales go to Laureus and enabled young people to spend their time wisely instead of ending up in difficult situations. I attended a charity diner about a month ago, together with IWC and it was interesting to learn more about this foundation. I learned that some people have all (eleven) IWC Laureus editions and have been supporting the good cause quite a bit I would say.

Although I had my doubts about this new Da Vinci at first, as I said the 1980s are not really known for its good taste in design, IWC did a really good job in designing this new version. The IWC Da Vinci Chronograph is not a simple copy-paste or retro project that we see with so many other brands today (not a bad thing per se), but invested quite a bit of effort in creating an interesting timepiece that is ‘classic’ enough for years to come. 13.700 Euro for this timepiece is not cheap, but given the fact that it is really well-finished, has a stunning blue dial, a beautiful case, Santoni alligator strap and an in-house developed chronograph movement adds up to this price tag. Besides, part of it is going to support a good cause.

On top of that, the watch is limited to 1500 pieces so it is a collector’s item for sure.